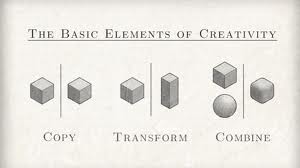 About combining the roles of both designers and businesspeople…

The TRIZ Matrix proposes the following Principles to solve this contradiction:
Improving 39: Productivity without damaging 11: Stress or pressure
14. Spheroidality – Curvature 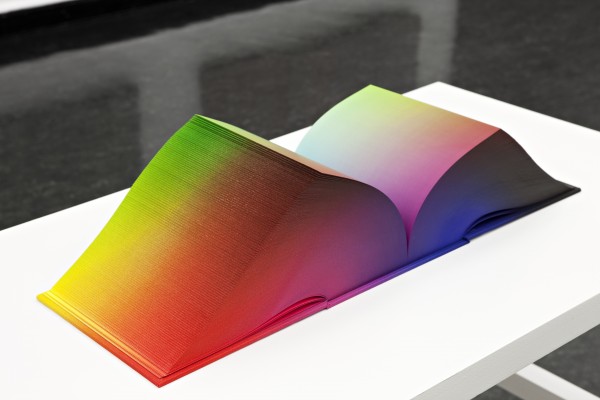 In the trailer of the upcoming Tegenlicht-episode, Noreena Hertz says:

…suggesting a transition point/phase of Loyalty.

A nice example with visual representation; about iterations and divorcing the non effective approaches (i.e. automated trial and error in nozzle design) at 10 minutes…

In an earlier post I commented on the work of Poiesz. Adopting this methodology leads to the following mental exercise.

According to Poiesz, an individual has intrinsic and extrinsic Motivation, Abbitity and Opportunity that defines behavior. These elements have to be taken into account of one another. Together they mark a behavioral factor: M*O*A = behavioral score.

The Intrinsic and Extrinsic Motivation (Mi, Me) together define the overall Motivation. However, there is the possibility that when the internal motivation is firm, it can over rule the external motivation (‘social pressure’, page 65, Gedragsmanagement, Poiesz 1999). Vice versa is assumable as well (frustration). The impact of M is as follows.

Let us assume the individual working in a team with a manager within an organisation. 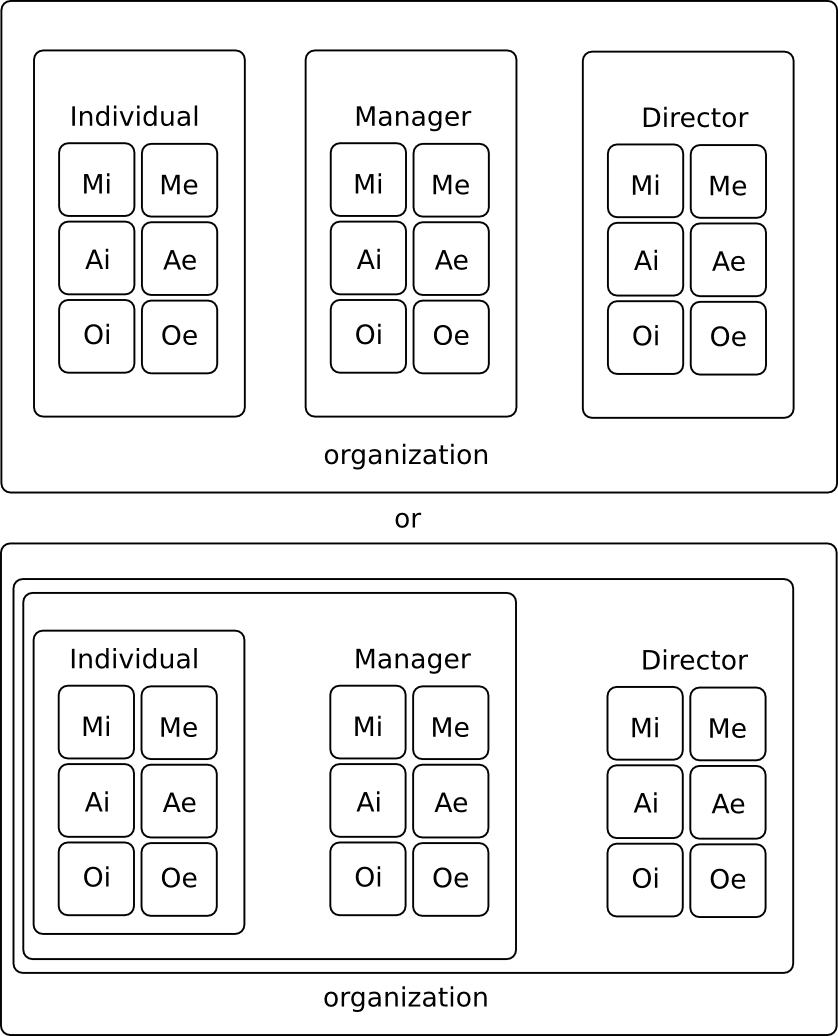 Let us now propose that the internal factors (Mi*Ai*Oi) are more or less stable and that the external factors are influenced by the persons up the hierarchical ladder. For instance the manager offers a personal appreciation (Ind +Me), a training budget (Ind +Ae) and agrees with the individuals personal development plan (Ind +Oe). In parallel, the director delivers a motivational management speech (Man +Me), additional secretarial support  (Man +Ae) and plans for market diversification (Man +Oe).
Of course, external conditions influence all persons as well (check DESTEP: i.e. competitors, market developments, pension, bonus system, tax rules, climate change, transport). 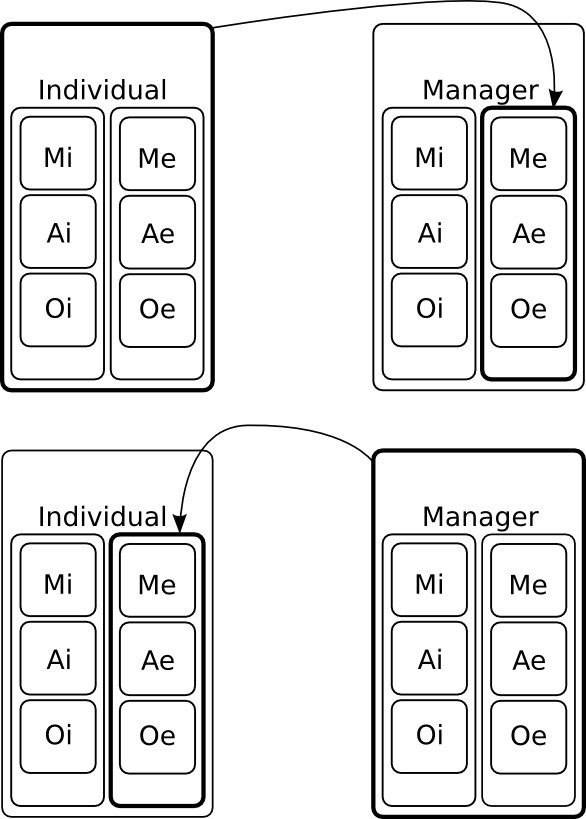 The same goes for the behavioral impact between manager and director. Accordingly, the same goes for individuals that represent organisations within an alliance. See an example of 5 partnering organizations, with individual representatives (only 2 interactions drawn): 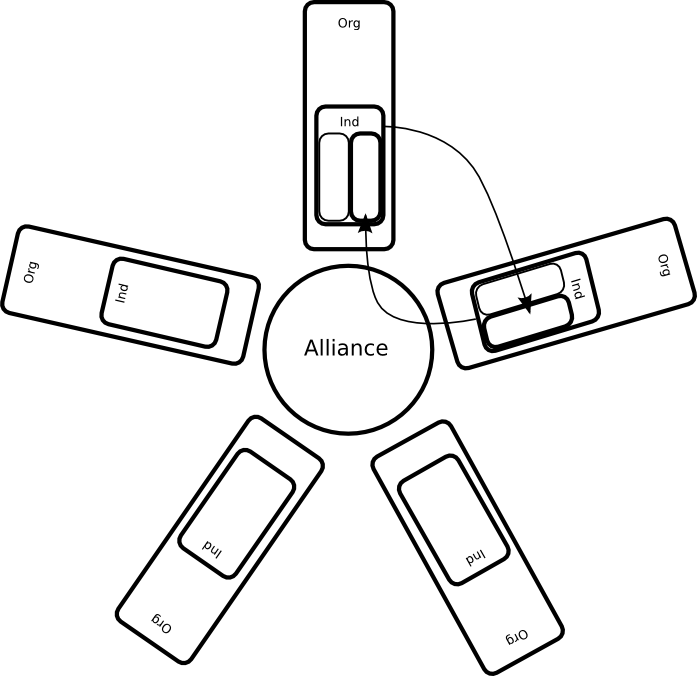 This exercise suggests that a persons behavior impacts the extrinsic motivation (Me, Ae, Oe) of both collegues and partners. There is a chain (or actually an interwoven network) of feedback loops of the wholes of the behavior onto parts of the behavior.

For now we see:

Note about factorization: this concerns driving new behavior or qualitative steering of existing behavior
Note about influence: the same goes for B ont A, and for all other individuals

A similar exercise using the Aizen model (or Leary’s Rose) would offer interesting material for comparization. Besides real world measurements and data assimilation.

Symbioses is known as:

Interaction between two different organisms living in close physical association, typically to the advantage of both (Oxford Dictionary)

Symbioses describes states of inter species relationships. These relationships are described as both close and longterm. They are clasified obligate (nessecary for the survival of the species) or facultative. Beyond the Oxford ‘typically to the advantage of both‘, symbioses has at least 3 types: mutualism, commensalism and parasitism. Mutualism is a state where both individuals of different species derive a benefit. Commensalism describes an interaction where only one individual benefits and the other is not significantly harmed or helped. In case of parasitism one individual benefits and one is harmed. 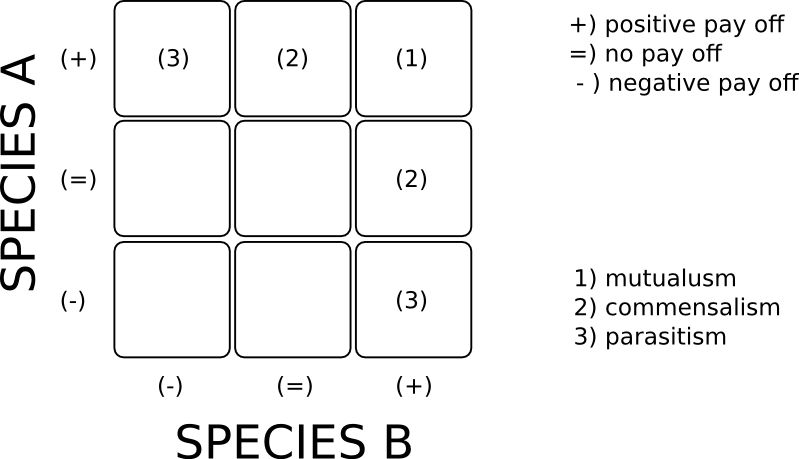 A -kind of separate- type is amensatism; one individual is inhibited or completely obliterated whereas the other remains unaffected. A sapling’s survivalproblem because of it’s position directly in the shadow of a bigger tree is an example of this type. This example is hard to classify, because the sapling can be of the same species as the bigger tree or not.
There is coexistence of both a positive and a negative pay off, respectively longterm evolution of a species (adaptation / survival of the fitest) and shortterm death of an individual.

In case of one plankton species that grows on a single nutricient, the number of individuals evolves into a limited population, due to the carrying capacity of the pool. Two plankton species that compete for a single pool of nutricients deliver two stable populations, where it is plausible that the low-energetic species has a competitive advantage: the species that is most efficient with the nutricient wins, in this case. This principle is known as competitive exclusion.
In case of two species in competion for two nutricients, Liebigs Law of the minimum (1840) states that the growth speed of a species is defined by the most limiting nutricient. Check: The number of nutricients limits the number of stable states of coexistence. In this case, one state could end up with a single species that deals efficient with both nutricients. Another state is when 2 species coexist, pushing away all other species.
A system with N limiting nutricients can result in stable states (equilibria with 1 to N species) or in unstable states. The authors use the expression: ‘The jack of all trades is a master of none’, referring to the trade offs. Seldomly a species is best on most or all fronts of competition.
Here’s an example of a distrubuted need for nutricients: 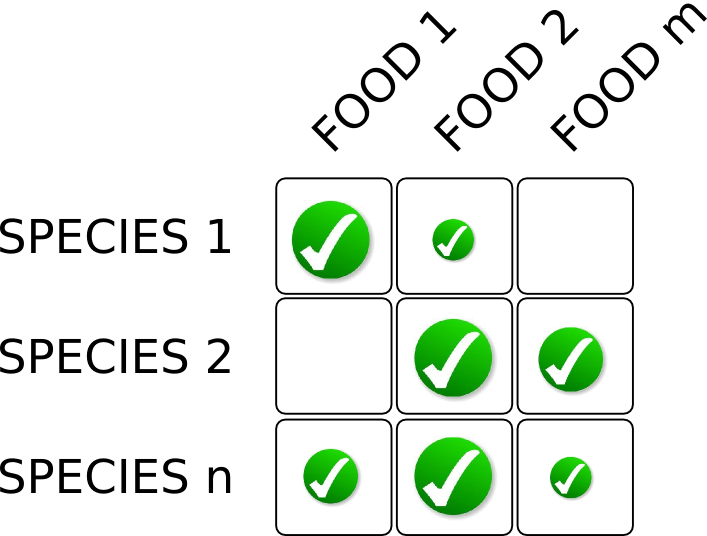 The authors then describe a system of 5 plankton species and 3 nutricients. Small differences in starting conditions of 5 nutricients lead to signifiantly changed configurations. In this case we have an unbalanced situation, where competition leads to chaos, resulting in increased biodiversity. Mathematics can help grasp the outcomes and appearing configurations, but it cannot predict them.

We can ask ourselves if current delicate-balance-approach of complex systems minimizes biodiversity as well. Or will increased biodiversity bring mainly negative side effects? It is plausible assume some impact on continuity or robustness of (individuals within) organizations.
Let us explore a bit further…

Similar to plankton, an organisation can be seen as an entity as well. 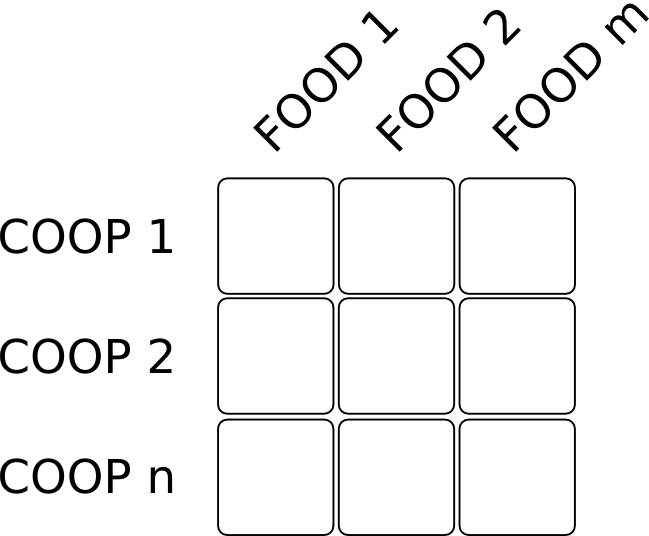 Even a system of organisations can be compared to a single entity, like plankton. 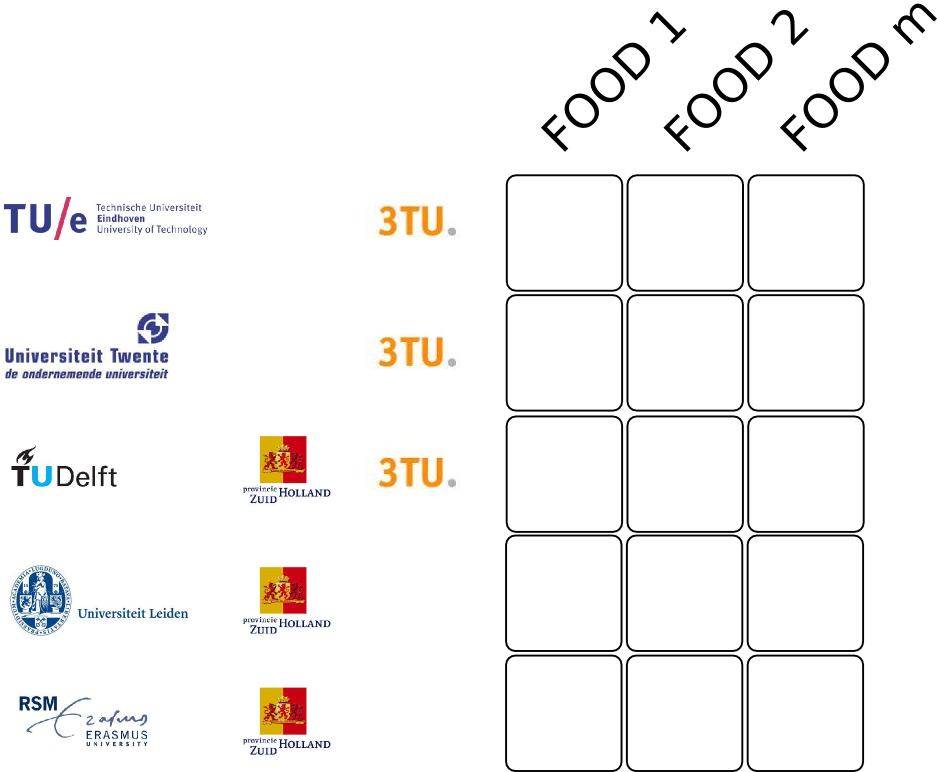 According to ‘plankton theory’, a merge into 3TU or Regional University cluster is only possible and sustainable when there at least more than three limiting nutricients, unless the mergers take a step beyond a delicate balance and embrace an unbalanced set of vulnerabilities.

Each University has a set of nutricients of it’s own: 1st, 2nd, 3th and 4th order money (dutch: ‘geldstroom’), plus a number resources from other institutes (source: dutch government). Although the Netherlands provide one pool of nutricients -with unique characters and conditions- , there is always a bigger fish. The Shanghai ranking and a need for internal efficiency are drivers for the merges of Universities, making possible (1) more students (gaining extra, indirect / external nutricients), (2) shared facilities (efficient nutricient-to-action-ratio A) and (3) a robust / adaptive portfolio of scientific curricula (efficient nutricient-to-action-ratio B).

Let us not forget the time span of ‘plankton theory’ and merges of universities. In a bigger closed system (an ‘earth pespective’), plankton population will rise and decline, whereas in a smaller system (a ‘pool perspective’) it is a matter of life or death for plankton species and Universities, for an individual diatom and Rector Magnificus.